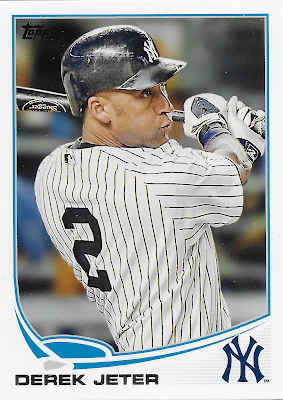 What’s that Turtle doin’? This is a tightly cropped image, something that initially seems like we might see a lot of in this set. But overall, photos zoomed in so far as to not see a player's belt are not all that common. Generally this can create a pretty good baseball card, revealing a baseball player face as they truly appear, in the midst of live game action.

Here, Jeter has just completed a swing and is following the flight of the ball, but I can't say he looks all that optimistic as he seems about to let out a downer exhale, rather than taking a breath to start hustlin' down towards First.

Where’d the egg hatch? Jeter was a first round selection by the Yankees in the 1992 draft, picked 6th overall.

How about the migrations? Derek spent his entire obviously probable Hall of Fame career with the Yankees. This card back features nearly complete career stats; of note is the .313 career Average going into his next-to-last season. It also includes our first League Leader In Italics, something Jeter was able to do in the Hits category some 13 seasons apart.

But that begs a certain question about the CAREER CHASE tidbit on the previous card, which uses Barry Bonds' Home Run 'record' - is his almost-ban from MLB not on the same level as Pete's? I guess not. Another curiosity is that Barry Bonds did not appear on any baseball card of any type, by any manufacturer, in 2013, and has not appeared on a Topps card since the instant his career ended in 2007. But I guess the card back writers can still print his name on the back of a baseball card all they wish.

Derek Jeter finished his career with 3,465 Hits, 791 short of the all-time MLB record.
Subspecies? A bit surprisingly, there is only one other Derek Jeter Sea Turtle card, a photo variation SSP or 'Super' Short Print, thought to exist in an edition of /25, which was not issued until inserted in packs in the Update set. The cataloging title is #2.2 "With Trophy" but I am not sure which trophy it is, and don't expect to own it any time soon.

I also believe this is the first card from the 2013 set to be re-printed in a newer Topps product - 2017 Archives. As a collector of all things Sea Turtle, I will be picking up a copy of that card, which only adds a stamp to the image on the front.


Bling That Shell This was an easy selection for what is now probably one of the Top 5 most expensive cards in this set. I went with the "Target Red" 'retail' parallel issued in packs at Target stores. I was never able to pull any parallel copy of this card, and had a bit of luck trading for it with a blogger early on in the construction of the All-Parallel set. 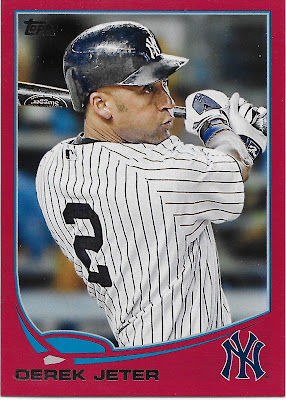