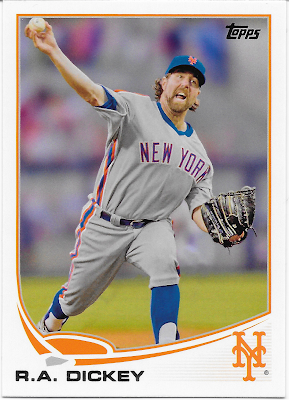 What’s that Turtle doin’? This card is possibly showing off a baseball playing strategy that I would possibly miss by just listening on the radio, and my baseball cards. Does R.A. Dickey use some sort of vocalization to distract the batter?

I mean, that probably couldn't help a batter's concentration — but my hunch would be there is a good chance that would be against a rule of baseball, not sure. I was intrigued by the idea enough to check out his throwing action via YouTube, and that was fun. He was silent as he pitched, turns out, and I am just being goofy. But I think I will be doing some more of that YouTubing R.A. Dickey highlights on a future slow news day, and I think you might like it too.

Overall, this is a pretty nice live action baseball card, particularly with the way the entire Mets team tri-color "racing stripe" can be seen on Dickey's body. That striping on certain New York road uniforms generally makes for a memorable baseball card, and I can't recall one that shows off quite this much length to it.

There is one demerit to issue - all due to Dickey's most famous pitch: the Knuckleball. I will never know how much Topps can choose to change the zoom of the source photo, but I do imagine they have some control over that. With just a touch more zoom-out to fit all of R.A. Dickey in the Sea Turtle frame, we could have seen the grip on the baseball, too. Now I will certainly be looking for an example of such on Knuckleballer baseball cards.

+Bonus points for the old school stirrups. There will be some knee-highs seen in this set, but the stirrups could make this card a unique one in 2013 Topps Baseball.

Uniform Hero? Yes, although this particular "throwback" road uniform for the Mets does not display the # on the front. Dickey wore #43 during his time in New York, but there he did not participate in the baseball tradition of giving #49 to a knuckleballer, possibly because Jon Niese was already using that # before his arrival. Though it should be noted that Dickey did not participate in that tradition anywhere else in his MLB travels, either.

Where’d the egg hatch? R.A. was drafted out of college by the Texas Rangers way back in 1996, as the 18th selection in the 1st round. He was also drafted by the Detroit Tigers in the 10th round in 1993, which seems like a fairly honorable selection for a player coming out of high school.

How about the migrations? It seems to me that the ups, downs, travails, and traveling of R.A. Dickey's life and career would make a darn good weekend afternoon bio-pic, to be shown during rain-outs of the Minor League Game of the Week on the cheap sports channel, so you would never get to see the whole thing all at once. I often wish I had such a TV channel to watch. Instead, I have baseball cards.

Dickey had a 12 Inning cup of coffee with the Rangers in 2001 but would not return to MLB action in Texas until 2003. So it would go throughout his career, a long tale of releases and Free Agent signings and even becoming a Rule 5 pick at one point, until suddenly in 2010 everything clicked. He quickly turned in 3 excellent seasons in the Mets rotation, capped with winning the 2012 Cy Young award in the NL.

Thus it is not too surprising to find Dickey holding down his uniform # on this checklist, like so many All-Stars before this spot.

But as this card was being produced, he was traded to Toronto in December, 2013. The Blue Jays received 4 years of his pitching services, as well as catcher Josh Thole in a bit of a package deal. A Knuckleballer usually needs the same regular Catcher for each outing; experience in handling the pitch is quite important.

The Mets received a catching prospect in return, Travis d'Arnaud, and solid veteran catcher John Buck. But they also received a pitching prospect named Noah Syndergaard, and that has worked out pretty darn well for them.

Dickey would turn in 4 fairly good seasons for Toronto, though not quite with #s matching his 2010-12 peak in New York. Overall it seems the Mets pulled the trigger at the just exactly perfect moment, but one must also remember what the Blue Jays are up against in the AL East before passing judgement on any particular roster assembled in Toronto.

R.A. would pitch one final, serviceable, season in Atlanta and throw his last game in September, 2017, against these very same New York Mets, a 6.2 inning, 2 run effort for which he did not receive a decision. He was 42 years of age by that point. 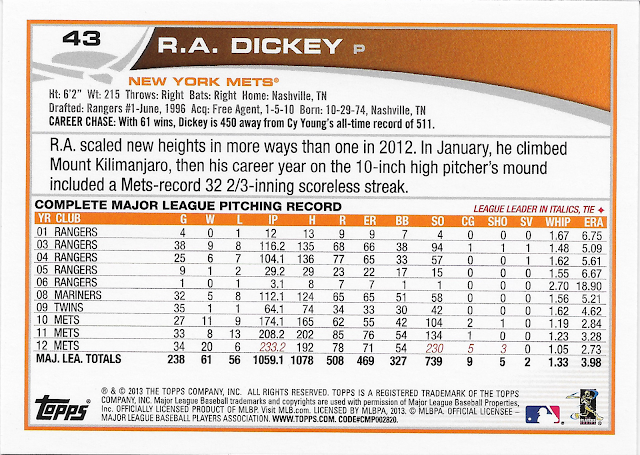 A classic Topps effort here, bringing in a little of Dickey's off-field life, a bit of a pun, and a statistic most baseball fans would be unlikely to discover anywhere else.

A triple sequence of League Leading stats is always pretty eye-catching, too.

Win 20 games in the previous season, and this is the CHASE you will be assigned. Without really considering the impossibility of catching Cy Young in Win totals, this does draw one's attention to the idea of being 38 years old and having 61 Wins in MLB - all without generally having been a Reliever. I would imagine that could make for a classic card back stat on some other Topps card.

R.A. Dickey was just getting warmed up at age 38; he finished his career with 120 Wins.

Subspecies? We will see R.A. Dickey many more times in this set, and he also appeared in Opening Day and Chrome in 2013, but with other, newer images than this one.

This card # has no variations, however I did find a 2013 R.A. Dickey card that does show off the Knuckleball grip, from the "Calling Card" inserts which I quite liked (and completed early on in 2013), given their artistic nature, though I somewhat fail to see how the theme connected them to "The Chase" theme of the set as a whole, unlike most other 2013 inserts. Anyhow, it sure didn't take long to find this genuine Knuckleball card: 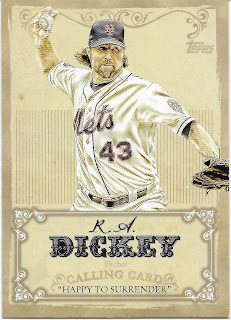 Bling That Shell You can't go wrong combining orange with the color blue on a Mets card, though I often wish Topps had used the dark blue of the Opening Day blue foil cards for the Wal•Mart blue parallel, rather than this much lighter shade - 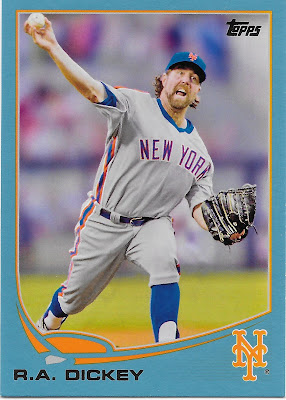