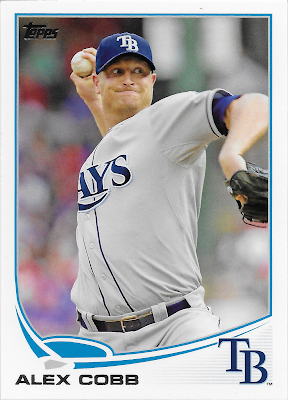 What’s that Turtle doin’? I think this Pitcher is smiling at the batter, too. He must be particularly pleased that his Catcher just asked for a 4 Seamer. Good thing I am standing in the on-deck circle still and I am not on the receiving end of this pitch. Cobb seems to be thinking it will be a wipe-out pitch.

I do like the authenticity of modern Topps Baseball cards in that I get to see what each player looks like while they are truly playing the game on a large majority (though not 100%) of the cards.

That is accomplished by showing a player's face clearly. I like how on this card, that is done without the shade from the bill of the cap overly obscuring Cobb's face, which is something I have started to see a few issues with on some recent sets where it semi-routinely feels like Topps ran the original high quality image through some sort of digital filter for some reason. I have never had that impression from one of the 2013 'Sea Turtle' cards.

But aside from all that thinking about today while looking at the past, there isn't a whole lot to remark upon, on this particular baseball card.

Uniform Hero? Sure enough; note the beginning of the card back text you will see below.

Where’d the egg hatch? Cobb was drafted by the Rays in the 4th round in 2006, after High School, rather than College ball.

How about the migrations? As a routine result of that, he did not reach the majors until 2011. But he quickly showed a lot of promise as the Topps card back writer picks up on... 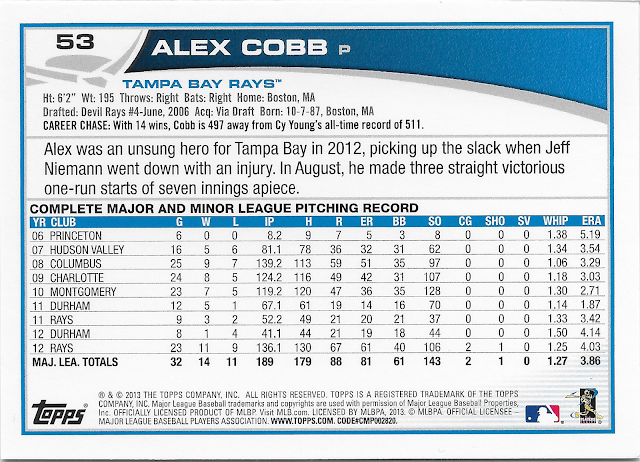 Perhaps one of the better card back writing assignments is to cover a young player who's career arc is still ascending, which makes sense right here in this performance driven checklist structure.

As it turns out, Alex Cobb has started all 146 Major League games he has appeared in so far, so this is the natural comparison to pick. This card came out at the start of his best 2 years in the MLB, posting an ERA < 3 in the AL in both of them, always a notable achievement for a starter. After the 2014 season however, the story of his career has been injury. 2015 was lost to rehab from Tommy John surgery. For 2018 he signed a 4 year deal in Baltimore where miscellaneous other injuries have continued to steal away his possible starts and the results; he is signed through 2021 and will continue to eat innings through a very tough and drawn out rebuild process in Baltimore.

Subspecies? As is basically routine for the better players occupying the better part of this checklist, this card also appears in Opening Day, probably based on the bright future Cobb held in early 2013 in Tampa Bay. However the card does not appear in Chrome, probably because that future, and Tampa Bay cards for most collectors, weren't so exciting as a new Rookie Card card, a key part of the 'collectability' of the Topps Chrome release. There are no other variants of this one.


Bling That Shell Well now this is a little exciting. On the very day that I sat down to write about this card, a Pink /50 copy finally appeared on eBay. I instantly bid as the shipping is cheap and I kind of almost want a complete set of the 'blue' teams on the pink cards. So although I already have a Pink card for this binder page (the Ryan Cook card), the blue team cards are the most challenging to place in this project as a blue Sea Turtle graphic disappears all too easily on a number of the parallels, and I could re-arrange the turtle shells if needed here.

I would kind of prefer to luck into finding a Factory Set Orange /230 copy of this card, but most of those are locked up in Factory Sets in people's closets, so I am not super optimistic of that ever happening. How this page, and this particular parallel, turns out in the project, remains to be seen...