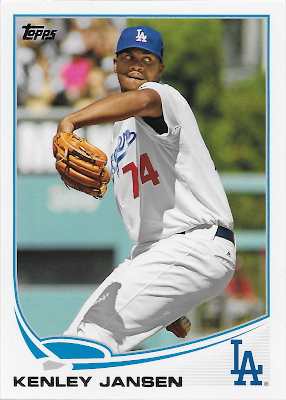 What’s that Turtle doin’? Probably making short work of another 9th inning; it must be a big divisional weekend game as Jansen definitely seems to be keeping the fans in their seats back there.

This card has great left-to-right motion, kind of like Jansen's most famous pitch. The tilted glove seems to be what the camera lens focused on and it initially draws the eye to the left side of the card but then Jansen's fore-arm draws the viewer back to the right where finally you notice Kenley's eyes focusing in on home plate.

Though it is much harder to see the ball there near the same point as on the Lincecum card, there is just enough light on this bright sunny day to reveal the seams on the ball - and a four seam fastball grip, the basis of a cutter.

Uniform Hero? Clearly. Jansen has worn #74 for his entire career.

Where’d the egg hatch? Kenley Jansen is from Curacao and was signed there by a Dodgers scout in 2004. Curacao has a population of a little over 150,000 people - but 3 Sea Turtle cards, which is quite probably the highest ratio of any country to supply players to this set.

How about the migrations? Jansen has been in the Dodgers organization since the signing and debuted in the Dodgers bullpen in 2010. He has never started a Major League game.

However, he was not signed as a Pitcher, but rather as a Catcher. "We're all told" goes the famous quote from Moneyball; but when Kenley was 'told' that his lack of a good hit tool would probably keep him out of the Majors he was fortunately also told that perhaps he could try pitching instead. His coach for that effort was one Charlie Hough, nearing the end of his post-MLB coaching career. 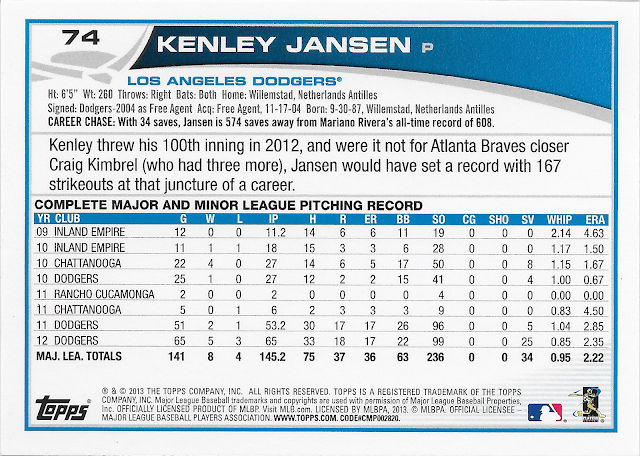 It's the little things, the itty-bitty things, that jump out at you sometimes reading the back of a baseball card. Quick - name another switch-hitting Pitcher. Yup, up there under "Bats:" it says "Both." But before you detour off to the Google Machine for the story of Kenley at the plate, I can tell you he has had only 9 Plate Appearances in his career. Still though, this card will keep me on my toes a little on flipping over Pitcher cards.

I was a little surprised to see mention of Kimbrel on this card; placing a youngster in the role of Closer was a bit of a thing in MLB in the early 2010s and Kimbrel was the prime example. But this card back makes it clear he was not the only impressive example of such a career start.

Also I would not advise hitting up the Google Machine for the details on Netherlands Antilles vs. Curacao; I think it would be smarter to just enjoy a nice vacation there instead.

CAREER CHASE: With 34 saves, Jansen is 574 saves away from Mariano Rivera's all-time record of 608.

The 'Save' is such a captivating stat. Every baseball fan wants their team to have not just a 'Closer,' but preferrably a 'Proven Closer'; evidence of that allure is the presence of Kimbrel and Jansen in the Hero # portion of this checklist.

So it is no surprise that this would be the stat comparison here. But given the card back text we just read, it is a bit of a pity that we can't compare K/9 or something, for Relievers, without making this odd little baseball card feature just too complicated.

Subspecies? Though Jansen would certainly become a 'Proven Closer' after this card appeared, as it was being created he only had one partial season of closing games for the Dodgers, so this is the only Sea Turtle card for Kenley as it does not appear in Opening Day nor Chrome.


Bling That Shell This is another parallel that has migrated in and out of the project at times; I really like the Topps Black parallel but I have been trying to avoid using them for the blue teams due to a lack of 'pop'. Lately, this particular card is back in, mostly due to the PITA factor of trying to re-arrange this page otherwise, and I do want an example of almost every team color + parallel color. 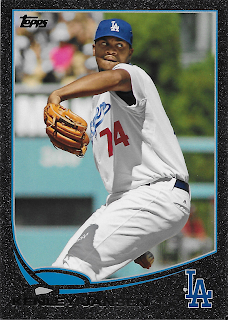