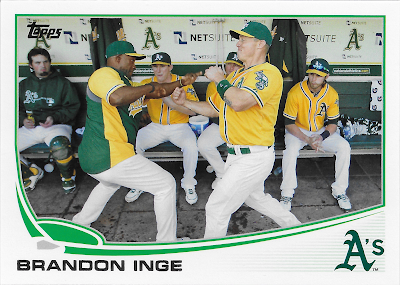 What’s that Turtle doin’? Just funnin' around there in the dugout. For the first time in the set, Topps keeps it loose as it breaks the official set theme of live action baseball and chillax' a little.

Over time collecting Topps Baseball cards created by photographs from inside MLB stadiums, one begins to recognize where the various pro photogs around the League tend to shoot from. In Oakland, for some reason, the photographer seems to have total access to the dugout; I base that on the # of cards created from either dugout there, which are not rare.

One thing I like about Dugout Cards is a quick glimpse at the card subject's teammates. I think that is Chris Carter going a round with Inge here. Meanwhile Josh Reddick seems about to say "hey, I'm trying to watch a game here" while for some reason Jarrod Parker looks like he is about to cry. Over to his right, it looks like the actor who played Jeremy Giambi has stopped by fresh from the set of Moneyball, though now sporting Catcher gear for some reason. Can't explain that one.

+Bonus points for a nice view of the classic A's shoulder patch.

Where’d the egg hatch? Brandon was drafted by the Tigers in the 2nd round of 1998, a year earlier than checklist neighbor Barry Zito, and is thus one of the older Sea Turtles still playing in 2013.

How about the migrations? This card documents the first of such actually. Inge reached the majors at 24, in 2001, debuting as a Catcher, where he would play about a quarter of his career. Known for his overall athleticism, he was a mainstay at Third Base for Detroit through the decade of the '00s, but also played a fair bit of Outfield as well.

But after the '00s ended, Time was starting to assert it's inevitable presence, specifically on Inge's offensive production, which had only occasionally reached league average. Though he was well liked by his Manager and General Manager for his defensive versatility, his reception in the fanbase was wearing thin despite his being a survivor of the worst Tiger season ever in 2003. Perhaps in the 20th Century, he may have been considered a Fan Favorite, but in the Social Media 21st Century, well, I'm not sure there are quite as many Fan Favorites as there used to be, when it is so easy to casually hate people online whenever one wishes.

When Dave Dombrowski unleashed his latest blockbuster signing of 2013 Topps Baseball cover star #28 - Prince Fielder in early 2012, Miguel Cabrera returned to Third Base and Brandon Inge was basically out of a job, though the Tigers seemed unwilling to forget his ten years of service with the club. The result felt rather cruel as the team kept Inge on through Spring Training with vague plans to play him at Second Base, some, and elsewhere, somehow, but Inge was totally unable to warm up his bat that early April and finally after just 9 games Dombrowski had to pull the plug he should have pulled back in January.

Oakland promptly signed him for infield depth and he promptly hit a Grand Slam for them on his first visit to Detroit in early May 2012. But as this card was being pulled from packs, Inge was in camp with a new team, the Pittsburgh Pirates. 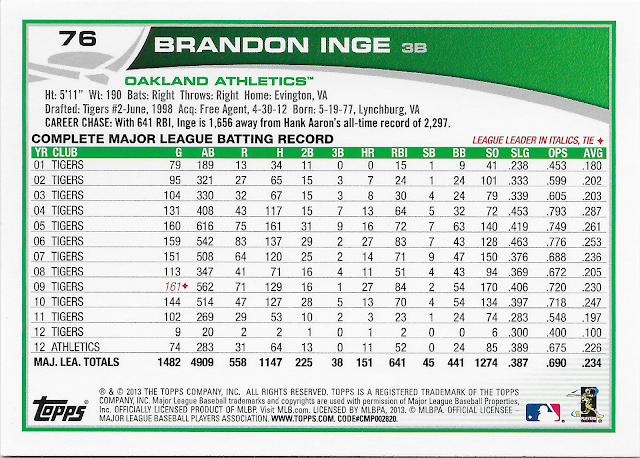 What I like about this card back is that for a Tigers fan, this is pretty much the complete story of his career in Detroit, excepting the slow conversion from Catcher to Third Baseman, for which there isn't room on complete stat card backs.

I like how this comparison draws the card back reader to Inge's 2006 season, which was one of his best at the plate and the year the Tigers lost a World Series. But for most collectors, that would probably be just a whatever.

Subspecies? Though this 'fun' card image would seemingly be a perfect fit for the Opening Day set, an almost sunset card for just an ordinary everyday Major Leaguer isn't something that Opening Day nor Chrome has much checklist room for. There are no variants.


Bling That Shell For this somewhat goofy card, I went with the somewhat goofy parallel choice, the Factory Set Orange. Which somehow slightly pays a little tribute to Inge's time in Detroit too, if you mentally squint at the idea a little: 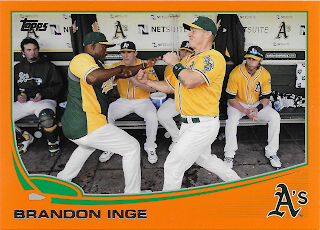