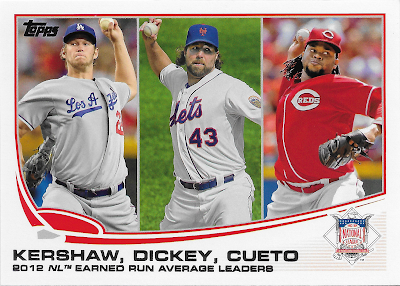 What’s that Turtle doin’? Leading the way from the mounds of the "Senior Circuit."

This is of course a long-standing tradition in a Topps Baseball set; my rough hunch is that more years have these cards than do not. Probably only Night Owl and some other baseball card historians know the actual % of Topps Baseball sets that include these. I do like these cards quite a bit; always have. I can't say I go out of my way to purposely collect them in a general sense, but I do always keep them; they are especially nice X number of seasons later, where X = any number you wish.

On this card, only Johnny Cueto is putting on an optimistic Pitcher Face here. But then he finished 3rd on this one, so it kind of seems like R.A. Dickey's wing&prayer outlook isn't the way to go either, and perhaps Kershaw's straight stare-down scowl at the batter is what gets you to #1.

That official National League™ logo sure is a classy bit of graphic design considering how old it probably is. If only there was a way it could add apple pie, hot dogs, and a Chevrolet symbol to all that glorious Americana there. But like many hard-working graphic objects, it probably wasn't designed to be shrunk down on to the corner of a baseball card, or look good on a TV camera from far away, like most Major League logos. In that way it kind of reminds of the way some excellent Minor League Baseball logos kind of struggle on baseball cards, too.

My favorite part of the front of this card is being able to see that Dickey is going to throw a knuckle-ball here. Recently I started trying to accumulate 9 copies of a card that shows this fairly rare pitch; one of my many extra copies of this card will certainly be a helpful 11% of that small-time collecting goal.

+Bonus points for all 3 teams issuing color-coordinated belts to their players.

Uniform Hero? 22 + 43 + 47 ≠ 81, sorry. Maybe the Topps checklist creator will slyly work that equation onto another one of these cards elsewhere in the checklist.

Where’d the egg hatch? The National League™ was formed in February, 1876.

How about the migrations? It has been in business ever since, making it the oldest currently active team sports League. And you thought it was called "The Senior Circuit" just because it is 25 years older than the American League. 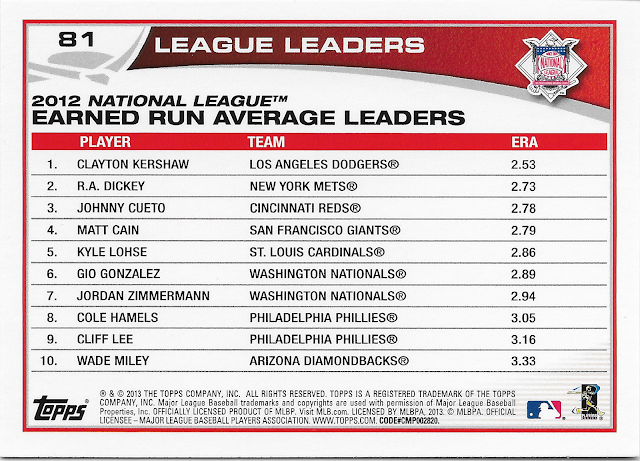 Now this is the real deal on why I like Leaders cards. I particularly like them years and years after the set was released, so my memory can be jogged of which baseball card in the set will be worth 10¢ instead of 2¢. And of course for just what the heck happened that particular season.

Here I am now pondering why I can't quite recall who the Cardinals beat in the Wild Card game that year, and then who they beat in the other NLDS. But I know Topps has me covered there, with upcoming cards in the checklist to help out an old man's fond baseball memories. But now I am really wondering just what happened to the Nationals and Phillies that October.

Subspecies? These cards only appear in the Topps Baseball set. Or, at least, with this design, as they usually appear in Heritage as well. Quite often, I prefer the old timey Heritage take on these, often with the top 50 players for the given statistic.


Bling That Shell As the National League™ logo deftly illustrates, when it comes to Baseball, you can't go wrong with red, white, and blue. Next time, let's get Kershaw to wear the rare Dodgers Home Alternate uni, so we can get this even more just exactly perfect: 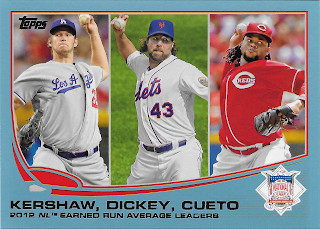