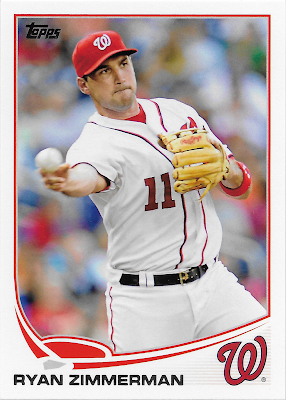 What’s that Turtle doin’? ...and the ball is hit weakly to the the third base side where it is a routine play for Zimmerman as he sends it across the diamond....

This photo has elements that lead the viewer over to First Base (the uniform showing the rotation of Zimmerman's body, his eyes) as well as elements that focus your attention on the baseball about to be thrown (the right arm extending towards you, the glove aligned with that).

But overall it all just does seem like a routine bit of baseball action; a bit staid & lacking urgency, even, as if this photo was taken during pre-game infield warmups. Finally the blurred baseball - not quite as blurred as on a hitter hitting card, but still quite blurred - reveals just how fast baseball fielding action takes place.

This is the second time in the checklist that a team has 2 sequential cards. I have never understood why Topps does that more on the rarely-seen side than on the routine side, unless perhaps they use a random # generator to connect the players to a checklist #, or something, whenever building checklists outside of this unique effort.

Uniform Hero? #11 there on the right lung (possibly a unique uniform placement?) ≠ #80.

Where’d the egg hatch? The Washington Nationals drafted Ryan Zimmerman as their very first draft pick, ever, in the first round of the 2005 draft as the 4th pick.

How about the migrations? Zimmerman was fresh from a successful career at the nearby University of Virginia and he appeared on the diamond in Washington as a classic September call-up after just 67 games in the minors. He proceeded to almost hit .400 that September and has been in the Nationals' line-up ever since September 1, 2005. 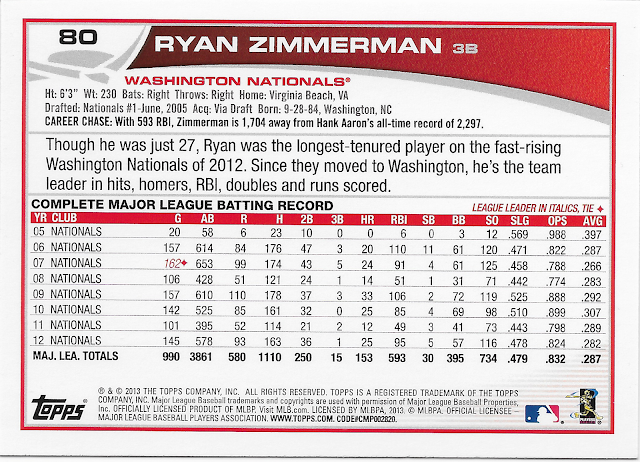 By the year of the Sea Turtle, Zimmerman was already pretty much the Face of the Franchise as the Topps card back writer notes in what was probably a pretty easy assignment here.

Though the card back does show one year probably amidst the National League Home Run Leaders, the more telling stat in Zimmerman's baseball #s oeuvre is the routine production of RBIs. Which is something that flows from Zimmerman's routine OPS values above league average, something that continued through the 2010s, for good OPS anyway, though RBI production has naturally been lessened whenever Zimmerman hits the injury-list.

The 2019 season was particularly rewarding for Zimmerman after such a good long career in Washington as he hit a Home Run in Game One of the World Series. Though his playing time has decreased some after 15 seasons in MLB, Washington did keep the band together and re-signed him on a one-year deal for 2020.

Subspecies? A player as well known to the local fans as Ryan Zimmerman, if perhaps not to all MLB fanbases via becoming an All-Star (only one appearance before this card), well is an easy choice to include on the Opening Day checklist, where he also receives two insert cards. And that same basic routine, everyday, I want his baseball card calculation sees this same card in Topps Chrome. Though there are no photo variations, there are plenty of choices on what color frame you can admire for this card.


Bling That Shell Is any team more solidly red, white, and blue than the Washington Nationals? That sure seems to make the Opening Day Blue frame a solid pick for this card: 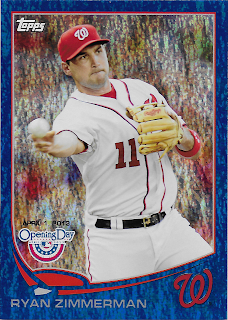