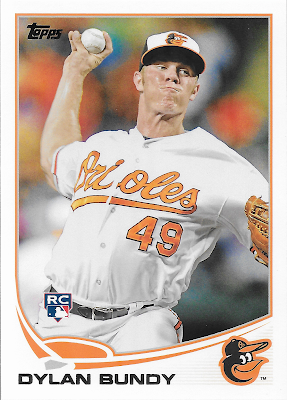 What’s that Turtle doin’? Tryin' to hide the red rosy cheeks of a fresh-faced Rookie, perhaps?

But of course Rookies are always (err, well, almost always) clearly identified in a Topps Baseball set these days. And here after lo these many Hero cards: our first Rookie Card© in this Topps Baseball set. I seriously doubt any other set of the 2010s makes collectors wait this long on the checklist before the Rookie Card fiesta gets started.

This particular float in the Pitcher Parade created by the official photo style of these sets - live baseball action sourced photos - is little different than the last Orioles Pitcher card in terms of pose and zoom level.

Here, the flowing Orioles script of the uniform nicely leads the collector viewer nicely off into the future of this probable four-seam fastball Dylan is about to throw here. Thoughts of the future are very apropos for a Rookie Card.

The basic sheen at several points on Bundy's skin, and the dark portions of the background, suggest this is probably a night card. Though when a player image is cropped/zoomed this tightly, that matters little.

All in all, a nicely captured live portrait of a brand new Major Leaguer, and not a bad card at all to hang a career on. Which is very important in the world of baseball cards, as for so many, only Rookie Cards are actually baseball cards. 2nd year cards and beyond could be effectively invisible for many who participate in The Hobby.

Where’d the egg hatch? Bundy was drafted in the first round in 2011 by the Orioles; and notably as the 4th player selected. Also notable was that he had just finished High School and received heavy baseball media coverage as the top 18 year old draft prospect in the country.

Adding to the excitement was the 4th player selected in the 2012 draft, also by the Orioles, another young Pitcher named Kevin Gausman, who's Rookie Card we will see on the Update Checklist. Baltimore had high hopes for bringing out a brand new young rotation (to also include Bud Norris and Chris Tillman) all right about the same time.

How about the migrations? Though some Rookie Cards can feature a player drafted by another team before putting on the official RC uniform, Bundy did come up through the Orioles system, and came up fast... 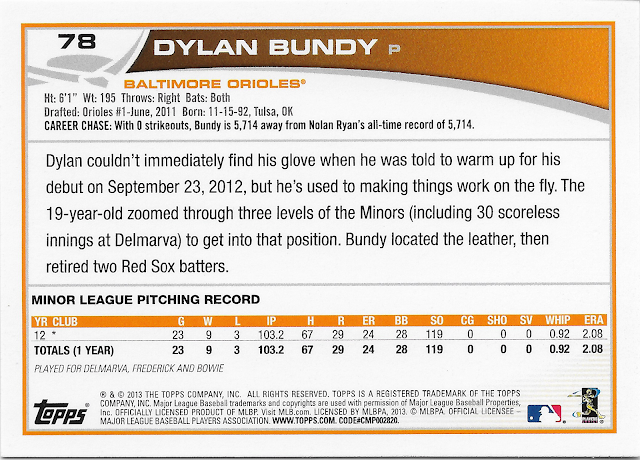 A bit of a disjointed effort there in the 3rd sentence - what leather? - but if you read the whole thing twice, it does come together.

I like how it didn't take long to find another Switch-Hitting Pitcher after the #74 - Kenley Jansen card.

This is the official format for a Rookie Card now - a single stat line from the previous season, and featuring only the MiLB stats, even when MLB stats also exist. This has never made any sense to me, at all.

Nevertheless Topps was so impressed by the 30 scoreless innings in A ball they created an insert card to memorialize it. Or, more accurately, they used that baseball feat to shoehorn a Bundy card into the "Chasing History" inserts which were part of the official theme of the Sea Turtle set: "The Chase." 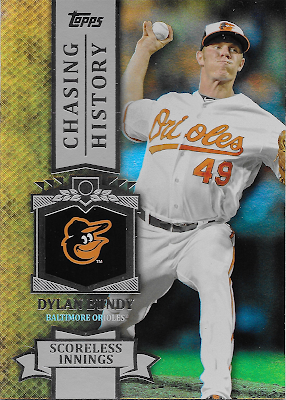 Hmmm, haven't we seen this picture somewhere before? 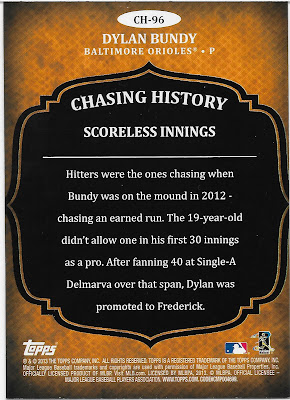 Of course the real point of that card was to serve as a bed for an autograph sticker; it was more than a little incongruous to find an insert for a 2 Innings Pitched Rookie amidst an insert set chock-a-block with legendary Hall of Famers. But that's the way she goes in the Topps Baseball set.

Well that didn't take long, i.e. for Topps to write one of these comparisons for a Rookie that created the greatest possible spread of any of the possible "counting" stats.

The irony of this one is something only hinted at on the card back text, and also something unknown as the card was being composed somewhere in Brooklyn. Bundy did debut in MLB in September, 2012, however he never appeared in a game during the year this card was for sale as he had Tommy John surgery in June, 2013. Perhaps his dominant High School success was built on throwing too many high quality breaking balls at very young hitters, which can certainly work for very young pitchers, but at that certain cost for so many of them.

Bundy would not return to MLB action until 2016 (and get his first K) after experiencing and rehabbing other injuries after the Tommy John surgery recovery process. And then it is worth remembering he had to pitch at home in Camden Yards, something not terribly unlike trying to be a young pitcher at Coors Field in Colorado.

When the 2020 season hopefully gets under way, Dylan Bundy should break camp, however that will work this year, with a new team - the California Angels, who traded away four very young pitching prospects to get him from Balitmore. Early Spring Training results have been quite promising and perhaps we are about to see Dylan Bundy 2.0 this year, eventually.

After the 2019 season, Dylan Bundy had thrown 602 Strikeouts.

Subspecies? With all the basic great prospect hope hype surrounding Bundy, this card was a natural fit to be included in the Chrome checklist. But that hype power was also strong enough to land this card on the Opening Day checklist as well, where Rookie Cards are generally scarce, or, well, were at one time; the 2013 Opening Day set had only 8 RCs in it, a # which has since tripled despite the checklist shrinking by 20 cards.

There is also a photo variation for this card #, of the "Fan Interaction" type which is probably an SSP, as opposed to an SP; that card did not appear until insertion in packs in Series 2. A copy of that one has not reached Sea Turtle HQ yet however, so you will have to check back here in a year or so to see that one.

There is also a Sea Turtle-esque card of Dylan Bundy that I hope to share with you eventually; one I only very recently discovered.


Bling That Shell I thought I saw a Purple Oriole? I did, I did: 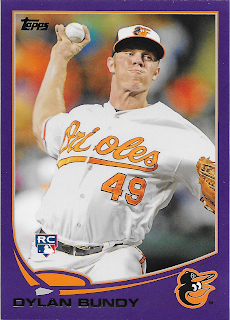