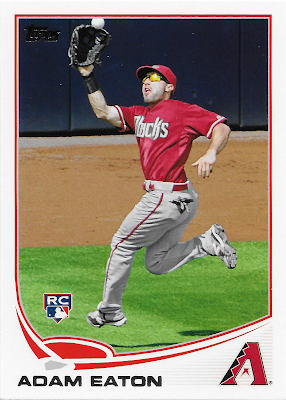 What’s that Turtle doin’? Oh just runnin' one down out here by the warning track before a nice smooth landing for the 2nd Rookie Card to appear in the set.

Here, Eaton just makes this running catch look downright easy, but the distance he is airborne, and the bit of blur around his shoes indicate how fast he is running to make this catch — he might have got a late break on the ball, or had been playing a weaker hitter a bit shallow.

Not too many baseball cards show the warning track; usually a player photographed this deep in the outfield is closer to the wall, attempting to steal a Home Run away from a batter, and then photographed up in the air, from the ground, which in turn cuts the ground (& the warning track) from the picture. This card looks like it was shot by a drone camera, or a 2nd baseball sent out to follow the first one, or something. It does make the viewer feel like they are up in the air, too somehow, along with that fly ball.

The photo composition works very well. An odd thing about that is the way his right leg and shoe, extended back upwards in the running motion, help draw the eye to the top of the card, where the baseball appears just as it plunges into the glove. That then draws the eye downwards & following his left leg and the whole result conjures up that nice smooth landing idea I just mentioned. And yet the rotation of Eaton's body so he can see the ball perfectly presents himself to have his live action portrait taken.

Really one of the best motion capture cards in the set, and one more that would make a final countdown of my favorites in the set were I to compile one. Though I'm not sure I would really want to start picking one over another for such a list.

+Bonus points for one of the coolest sunglasses-on-baseball-card shots I can ever remember. How often do you ever get to see The Sun, on a baseball card?

Uniform Hero? Not even close. Though the image on this card might make you think that @ #79, that would make a great # for a Wide Receiver, those uniform #s don't actually start into the 80s range, and #79 is traditionally a defensive lineman so this whole thought now has absolutely nothing to do with this baseball card.

Where’d the egg hatch? Adam was drafted in the 19th round of the 2010 draft by the Diamondbacks.

How about the migrations? Eaton would then debut quickly in Arizona in September, 2012, only a few months before this card was composed. 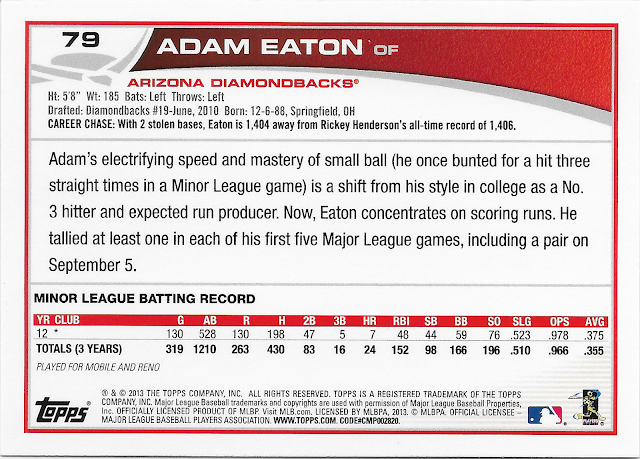 Here the card back text really kind of battles with the official Rookie Card© stat format with that refusal to acknowledge any MLB stat production before the magical logo was applied to the front of the magical Rookie Card. Which of course these days, is no longer quite a Rookie Card anyway considering how players can have a dozen or more base baseball cards created for them before they reach the Topps Baseball set.

All I can say on the single stat line here is that Mobile and Reno must have some mighty big ballparks for Eaton to have hit only 7 Home Runs with a .523 Slugging % - that, or he was really good at stretching out singles vs. minor league outfielders. I will go with the latter idea there I think.

So I guess you can gleam something from that weird, one year, multi-team stat line officially created for all Rookies© on the back of their big card. But I will still never warm up to this ever so weird back-of-baseball-card format.

It has been many, many cards since we have seen the Henderson record. I think Jesse Orosco is probably beating out Rickey on this card back line so far.

In the 2010s it is nice to consider players known for stealing bases, when The Data strictly controls the Go sign probably more than the Manager does at this point. So it is nice to see this comparison, but I am slowly realizing that the vast majority of players drafted out of College have lesser chance at baseball immortality in the record books or eventually Cooperstown, given the way counting stat comparisons and age and career length all work, particularly in this century.

Eaton would move on from Arizona to play in Chicago after a 3 team trade (can Arizona participate in a trade any other way? I sometimes wonder), and then in Washington after another high leverage trade, where he had a very nice performance in the 2019 World Series after a couple injury shortened campaigns in '17 and '18. He is signed with the Nationals through this coming (I hope) 2020 season, with a team option for 2021.

However in MLB action he has never stolen even half as many bases as he did in that 2012 minor league campaign. As games commence in 2020 (I hope), Adam Eaton has stolen 81 bases.

Subspecies? Fortunately for checklist completers everywhere, another Adam Eaton wrapped up an MLB career in 2009 so we have never had to deal with 2 Adam Eatons on one checklist. Topps more generally manages to do that with 2 cards of one player usually.

However given those exciting AA&AAA stats compiled on the back of this card, it is not surprising that this one was chosen for inclusion on the Topps Chrome checklist. And as a Rookie Card© there, that means there is an autographed version and that means there is an image variation for those cards. And that means I am collecting that checklist, although the Eaton card will have to be added here, someday.


Bling That Shell For such a sweet sunlit action card I wanted to go with maximum shiny; I suspect the Topps Chrome parallels of this would make a nice 'rainbow' effort. I am working on one of those for this card, though so far I only have the tough Black /62 parallel.

But given the varying tones and the strip of green grass, I picked up a Blue Sparkle copy of this card pretty early on: 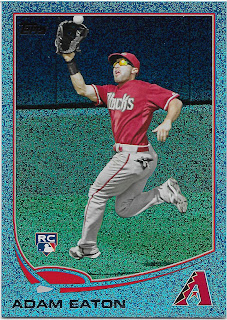